Thanks for visiting this page.

I’m thrilled to announce that my second book, Animal Labour: A New Frontier of Interspecies Justice?, which I co-edited with Will Kymlicka and Kendra Coulter, was just published by Oxford University Press. This book emerged from my work as a postdoctoral fellow at Queen’s University’s Philosophy Department and the workshop on the topic I organized in May 2018. The book is available on the OUP site here.

For centuries, animals have worked alongside humans in a wide variety of workplaces, yet they are rarely recognized as workers or accorded labour rights. Many animal rights advocates have argued that using animals for their labour is inherently oppressive, and that animal labour should therefore be abolished. Recently, however, some people have argued that work can be a source of meaning, self-development and social membership for animals, as it is for humans, and that our goal should be to create good work for animals, not to abolish work. In this volume, an international and interdisciplinary group of scholars explores the benefits and drawbacks of animal labour as a site for interspecies justice. What kind of work is good work for animals? What kinds of labour rights are appropriate for animal workers? Can animals consent to work? Would recognizing animals as “workers” improve their legal and political status, or would it simply reinforce the perception that they are beasts of burden? Can a focus on labour help create bonds between the animal rights movement and other social justice movements? These and other questions are explored in depth. While the authors defend a range of views on these questions, their contributions make clear that the question of labour deserves a central place in any account of justice between humans and animals.

Also in 2019, my monograph Protecting Animals Within and Across Borders: Extraterritorial Jurisdiction and the Challenges of Globalization came out from Oxford University Press! The book is available open access – in full length – here (click on “open access” on the top right) and here’s a short abstract describing what the book aims to do: 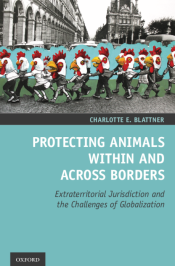 Institute of Public Law, Faculty of Law, University of Berne